Fall 2019: The CCA Pragmatism Working Group’s upcoming mini-seminar (3 meetings over six weeks) on the theme of “The World of Pragmatism.” 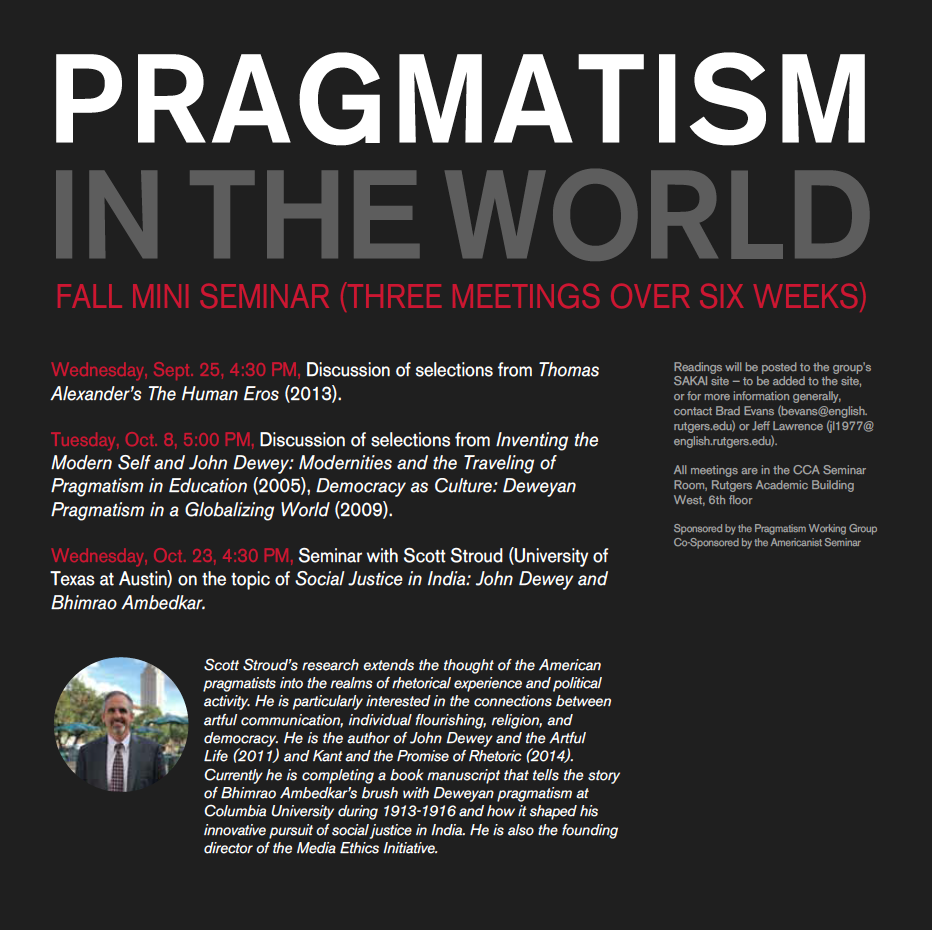 Discussion of selections from Thomas Alexander’s The Human Eros (2013)

About The Human Eros:

“The Human Eros explores themes in classical American philosophy, primarily the thought of John Dewey, but also that of Ralph Waldo Emerson, George Santayana, and Native American traditions. Alexander’s primary claim is that human beings have an inherent need to experience meaning and value, a “Human Eros.” Our various cultures are symbolic environments or “spiritual ecologies” within which the Human Eros seeks to thrive. This is how we inhabit the earth.

“Encircling and sustaining our cultural existence is nature, yet Western philosophy has not provided adequate conceptual models for thinking ecologically. Alexander introduces the idea of “eco-ontology” to explore ways in which this might be done, beginning with the primacy of Nature over Being but also including the recognition of possibility and potentiality as inherent aspects of existence. He argues for the centrality of Dewey’s thought to an effective ecological philosophy. Both “pragmatism” and “naturalism,” he shows, need to be contextualized within an emergentist, relational, nonreductive view of nature and an aesthetic, imaginative, nonreductive view of intelligence.”

Discussion of selections from Inventing the Modern Self and John Dewey: Modernities and the Traveling of Pragmatism in Education (2005), Democracy as Culture: Deweyan Pragmatism in a Globalizing World (2009)

About Inventing the Modern Self and John Dewey…

“This collection includes original studies from scholars from thirteen nations, who explore the epistemic features figured in John Dewey's writings in his discourses on public schooling. Pragmatism was one of the weapons used in the struggles about the development of the child who becomes the future citizen. The significance of Dewey in the book is not about Dewey as the messenger of pragmatism, but in locating different cultural, political and educational terrains in which debates about modernity, the modern self and the making of the citizen occurred.”

About Democracy as Culture…

“Using a multidisciplinary approach, contributors to this volume explore the significance of John Dewey’s Pragmatism for the contemporary world. They examine such issues as whether Classical Pragmatism justifies global democracy, whether Dewey’s idea of democracy―so intimately linked to American culture―has any relevance for other cultures, and whether democracy can take other forms than those found in Europe and America. Contributors focus on Dewey’s cross-cultural experience and affinities with Descartes and modern Neo-Confucians to provide a glimpse of how Dewey’s influence outside America has stimulated other cultures, heralding a new stage in the growth of Pragmatism.

Seminar with Scott Stroud on the topic of Social Justice in India: Bhimrao Ambedkar’s Brush with Dewey.

Scott Stroud (University of Texas at Austin) specializes in the intersection between communication and culture. Working at the juncture of rhetoric and philosophy, much of his research extends the thought of the American pragmatists into the realms of rhetorical experience and political activity. He is particularly interested in the connections between artful communication, individual flourishing, religion, and democracy. His book, John Dewey and the Artful Life (Pennsylvania State University Press, 2011), engages these themes in detail. His most recent book, Kant and the Promise of Rhetoric (Pennsylvania State University Press, 2014), provides a first-of-its-kind reappraisal of Kant and his relation to the rhetorical tradition. Currently he is completing a book manuscript that tells the story of Bhimrao Ambedkar’s brush with Deweyan pragmatism at Columbia University during 1913-1916 and how it shaped his innovative pursuit of social justice in India. Stroud’s other work also engages topics in comparative/non-western rhetoric, religious rhetoric, narrative theory, and communication ethics. His research has been published in venues such as Rhetoric Society Quarterly, Philosophy & Rhetoric, Rhetoric & Public Affairs, the Journal of Communication and Religion, theWestern Journal of Communication, Advances in the History of Rhetoric, and the Journal of Speculative Philosophy. In 2014-2015, he was a visiting fellow at the Center for the Study of Democratic Politics at Princeton University. Dr. Stroud is the founding director of the Media Ethics Initiative. 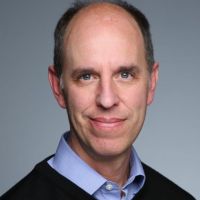 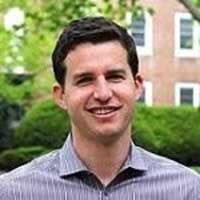